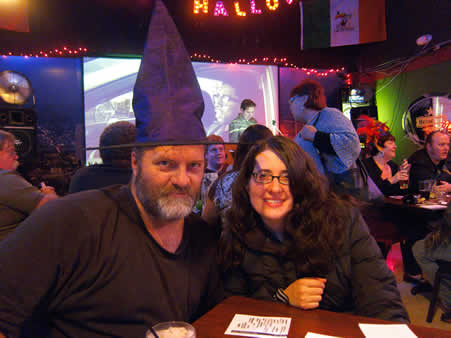 I got an early call to Tuesday’s Pub Quiz at Shanahan’s from Nathan but he didn’t know what was going to get the team bonus points until Monday. Naturally, it was a costume, it being Halloween season. I haven’t really done the costume thing for a few years and sort of forgot about it until just before I was ready to make the drive to Vancouver. Barbara wasn’t going, but she offered up the witch hat she uses to hand out candy. I got to the venue and grabbed a table. Nowhere to set the hat, so I just wore it for the next couple of hours.

After one of the rounds, the host announced that there would be awards for the best costume in several categories: Funniest, Best All-Around, etc. The first one up was Scariest, and the only entry was a Friday the 13th hockey-mask guy. I (figuratively) tossed my hat into the ring and yelled out “I’m not a witch! I’m Christine O’Donnell!” Judging was done on clap vote and the first round came out more or less even. I got a little more love on the second round to clinch the title and ten points for the team. You can see in the photo above with Nathan’s wife Sara that the likeness was dead-on.

We were ahead all the way to the final round but came up short in the question about movies derived from the Tales From the Crypt franchise. I made a good guess with the Dennis Miller epic Bordello of Blood but couldn’t come up with Demon Knight. Wrong decade for my horror knowledge.